A slow day in December

My kids and grandkids have stopped telling me I need hearing aids, and I thought it was because I was doing all right hearing-wise.  I haven't been using my hearing aids for about a year, because I almost lost the one for my left ear, and rather than lose them, I decided to keep them safe in the box they came in.

Today, Dave and I went back to the place where we bought my aids and got them fixed up and ready for me to take on again.  Wow!  I had no idea of the loss until I heard things the way other people do.  After, we went to a restaurant for dinner, and I could hear the background music which recently I had thought was a rather silly thing for restaurants to spend money on as it could barely be heard....then at home, we could turn the TV sound down to 7 instead of 15. Kind of a joy! And it's just another instance of how kind Dave is. 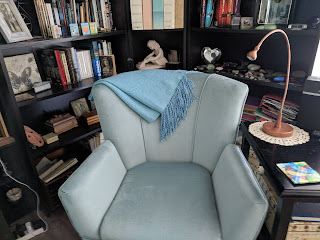 Now that I've tackled sound, I'm about to tackle the sorting of my books.  We have a couple of sets of bookshelves, but they're full and almost all the books read, so it's time to get serious about what can be kept. Who am I trying to fool?  I am always passing books on and then missing them. Just this weekend, I found 4 books I'd begged Emily to take which I would love to read again. I brought one of them home and I know that I'm going to keep thinking about them until I give up and ask her if I can have them back. Then next year, I'll be trying to get her to take them again.

One of the things that would make it easier would be to determine not to put things other than books on the shelves, but I like the mix. Or I just don't like to leave myself with nothing to worry about.

So, Where has she been?

Well, I have never had so much time between blogs, not because I'm not interested in seeing if there's something fun going on in my brain, but because I've had "being 76" take a toll.  Until the weather got cold, rainy and late autumnish, I was out for a good walk every day, loving that I live in a part of town that allows me to really enjoy the experience.  I live about 20 minutes from "downtown", the same distance from "la belle province"; and if I walk west of our place, there's a near-river bicycle path which is kindly shared with walkers.

Suddenly though, that just didn't appeal. I stayed home, crocheting Christmas presents, reading and watching Star Trek for 5 hours straight on TV. I've hit higher than my agreed-on-with-myself weight and my muscles and limbs keep reminding me that this slacking about it's not good for me, as if I didn't already know.

I'm hoping that confessing to this behaviour is going to give me whatever push I need, but even as I'm writing, I'm telling myself that I can't change right now because of all the stuff that needs doing at Christmas time. What a way to set yourself up to fail.